This article is a guide to making applications UAC aware for Vista, and aims to explain some of the pitfalls of failing to do so. An application can be made Vista aware through the use of an embedded manifest. Without this Windows may virtualize access to resources which effects both file system and registry access. Note the guide also relates to UAC on Windows 7. 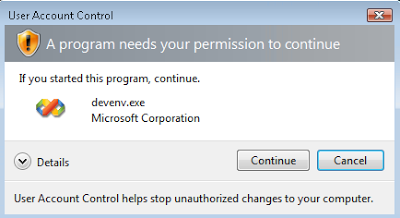 As you may know, permission control in Vista has changed radically. This is partly due to the realization that the vast majority of Windows users login to their machines with an administrator account, rather than using the recommended limited account which has more restrictive permissions. Applications running on the machine inherit these user permissions and therefore are usually running with full administrative rights. This obviously makes the operating system much more vulnerable to malicious software and viruses than was originally intended.

The answer that the Windows team came up with is UAC, or User Account Control. With UAC it doesn't matter if you login as administrator, all accounts run under the same limited set of permissions and are not permitted to access protected resources unless explicitly allowed. Instead applications must now ask permission from the user in order to gain access to these resources, known as elevation.

Elevation happens when an application that is flagged as needing administrative permissions is first launched, or when an application is explicitly launched with a run as administrator command by the user. This is the only time applications can do this as applications cannot change their level later and decide to elevate once running. To do this the process must be terminated and relaunched under a new set of permissions, requesting authorization from the user to do so. The only exception to this is if an application is launched from an existing elevated process. In this case the second process inherits the privileges from the first and the user is not prompted.

The elevation request takes the form of a dialog box that consumes the desktop and is secured against inter-process communication. The user is required to make a choice to allow the application the requested elevation rights or to refuse it. Applications cannot elevate without this user interaction, and this helps secure the desktop from unsecure access to resources.

The impact of UAC is huge, and even effects something as insignificant as the task tray clock. In Vista you will notice you can no longer change the system time by simply clicking on the clock, this is an administrative task and requires elevation.

One of the problems that arise from the introduction of UAC is that many legacy applications still require access to folders and registry settings that are now protected; for instance applications which store configuration data in the Program Files directory instead of using the inbuilt Common AppData path. This is no longer allowed and leads to compatibility issues.

In order to improve compatibility and allow legacy applications to run in a UAC enabled environment, the operating system uses virtualization. This creates a virtualized view of file system and registry resources accessed by the application, and redirects the requests transparently behind the scenes to alternative sandboxed locations. In most cases this can allow a legacy application to function as normal, however this comes with a performance overhead and is only a short term solution. These applications ultimately need to be rewritten to remove their reliance on any protected resources, and instead use the recommended locations to store application and user data.

It goes without saying that a developer should never reference these virtual locations in code. The correct locations for storing application and user data are determined by the environment variables and Windows API. Legacy applications that already use these to read/write application data to the Common AppData folder for instance, won't require virtualization. On Vista this path would correctly resolve to C:\ProgramData.

The manifest is an xml resource file that can be embedded into the application. In terms of UAC, this serves 2 purposes. Firstly it tells the operating system that the application has been designed with UAC in mind, and that it therefore should not attempt to virtualize any folders or registry settings. If the application still attempts to access protected resources after making it's declaration, then these requests will simply fail rather than virtualize. The other thing it does is allow the application to state the privilege level at which it needs to run, and whether it requires elevation.

These files have been around for a while, and the new section added for UAC control is the requestedExecutionLevel element. The level attribute may be one of the following values:

The uiAccess attribute determines whether the application requires access to any protected UI elements, such as system dialog boxes or higher-level processes. Only signed applications may do this as it requires additional security tokens. This value defaults to false.

Techniques for adding the manifest vary between technologies and languages. For .NET managed applications the following command lines can be used in a post-build step, or via a command prompt using the Microsoft MT.exe tool. Note that the final parameter changes depending on whether the application is a library or an executable.

In this example a manifest file saved as Foobar.exe.manifest is added to an application named Foobar.exe. Note the #1 for application.

In this example a manifest file saved as Foobar.dll.manifest is added to a class library named Foobar.dll. Note the #2 for a code library.

Alternatively Visual Studio 2005 introduces the option to add a manifest to a project and embed it in the compiled output. This can be done by choosing Application Manifest File from the add item dialog. This adds a file called manifest.app to the project and allows you to edit the manifest settings. For Windows forms applications the manifest embed options can be set in the project properties application panel.

By default the elevation dialog is an orange box. To turn this into a friendly blue dialog, the application needs to be code signed. See further reading for links to articles regarding this.

Elevation procedures surrounding installers are a bit too complex to go into detail here, however be warned that the requiresAdministrator flag on an MSI package does not actually provide full administrator permissions. This actually behaves slightly differently and runs as a subset of the full privileges unless you use a bootstrapper to gain full elevation. It's rare that installers would require these additional tokens as the installer's administrator permissions are generally sufficient.

To make an application UAC aware for Vista, a manifest file should be embedded into the executable or code library with the requestedExecutionLevel element. This prevents virtualization of data access requests and improves performance. It also ensures that application data intended for application scope is not limited to the current user scope.

When referencing file system and registry data within the application/user scopes, ensure that the relevant environment variables are used to correctly locate the unprotected resources.

If your application requires access to protected resources then set the requestedExecutionLevel element to an appropriate value (other than asInvoker), and consider signing with an Authenticode certificate. This will ensure that the user is prompted to elevate the process, and ensure that the application has the required level of privileges to perform it’s tasks.