DevOps is the seamless union of developers and operations working as one to facilitate high speed-to-market. It can be considered the approach of applying Lean or Agile to principles to infrastructure and operations. It breaks down silos within organisations and enables teams to move at a much greater pace to deliver software at scale.

“[DevOps is] a cross-disciplinary community of practice dedicated to the study of building, evolving and operating rapidly-changing resilient systems at scale.” — Jez Humble

In many organisations, DevOps is still massively misunderstood with dedicated departments clinging onto those silos under the gise of DevOps. For those that have been successful in removing those silos, get ready because the game is already changing.

Whereas DevOps works to leverage Cloud computing, Serverless is the new higher-order kid on the block. It will require an evolution away from DevOps and even further away from operations as we knew it.

This article explores the evolving technology landscape and why JEFF is coming to overtake DevOps.

The first question is why does DevOps exist?

DevOps was made possible through the commoditisation of Cloud computing. Through competition, the 3 giants of Cloud computing have commoditised compute infrastructure and driven down costs. They have changed the game in how we manage and deploy applications at scale. Traditionally high mean-time-to-recovery (MTTR) needed dedicated and specialist operations teams. The advancement of Cloud infrastructure with low MTTR reduced this need and gave rise to DevOps.

DevOps helped companies stay competitive. It meant leveraging those Cloud infrastructure commodities rather than trying to replicate the capability in-house. It empowered delivery teams to set up deployment pipelines and infrastructure themselves on Cloud services with relative ease, superior security, support, and scale. It removed the need for traditional practices like disaster recovery and capacity planning. 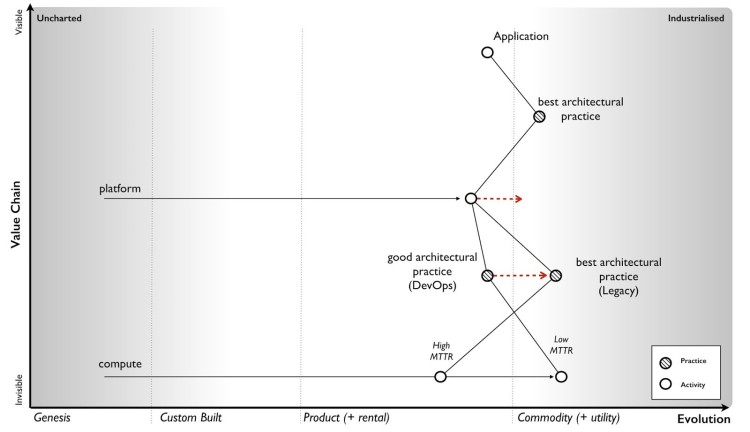 For companies embracing DevOps, it means faster delivery of software on Cloud infrastructure at scale.

Well, the good news it’s not another acronym. It’s a joke term Simon Wardley (Cloud guru and strategist) uses to describe the next evolution of architectural practices to support Serverless technology.

NoOps is a more familiar term which may emerge to become this new architectural practice. 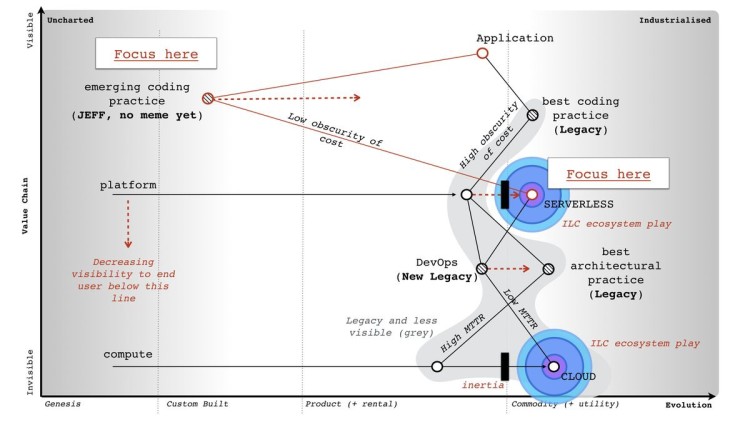 Serverless is a higher-order system forming above Cloud compute technology. It abstracts infrastructure even further down the value-chain. These technologies now make it possible to deploy and scale applications with no consideration to infrastructure or runtime complexity. Serverless provides consumption-based pricing rather than the cost of always-on servers.

This isn’t a new concept and has been around for a long time. What’s changing is the increasing commoditisation of Serverless through competition, reduced costs, and the ease of entry.

New Serverless providers like Zeit and Netlify leverage Cloud computing to make running Serverless at scale incredibly easy and without upskill. It’s literally as easy as linking the provider to your source repo or running a shell command. This is huge. It removes operations and DevOps becomes legacy.

These providers aren’t building their own compute Clouds. Like the rest of the industry, they are leveraging the industrialisation of Cloud computing and building higher-order services and products around them. Zeit for example seamlessly integrates with Azure, AWS and Google Cloud behind the scenes.

As technology evolves into commodities, it moves further down the value-chain. This means it becomes much more abstract and less visible to higher-order systems above them. They also become increasingly invisible to consumers.

DevOps formed to enable companies to move faster and deploy software more reliability and a greater scale. This was made possible through the commoditisation of Cloud computing. It was the response to change and the set of practices & principles needed to better leverage the technology.

Serverless is now changing the game again through its commoditisation. In doing so, infrastructure & operations are becoming increasingly invisible outside of those specialised industries.

In the future (and now) companies can deploy software reliably at scale, and without any consideration to traditional or Cloud-based operations. It will require a new set of practices and architecture to unlock the competitive edge it brings. Whether it’s called JEFF or NoOps, it’s emerging and there’s no escape.

It means organisations will need to continually evolve to stay competitive and relevant. For those that keep up, the evolution of technology increasingly allows more focus on product development and less on investment in operations and infrastructural support. The agility to evolve with technology is the key to success.